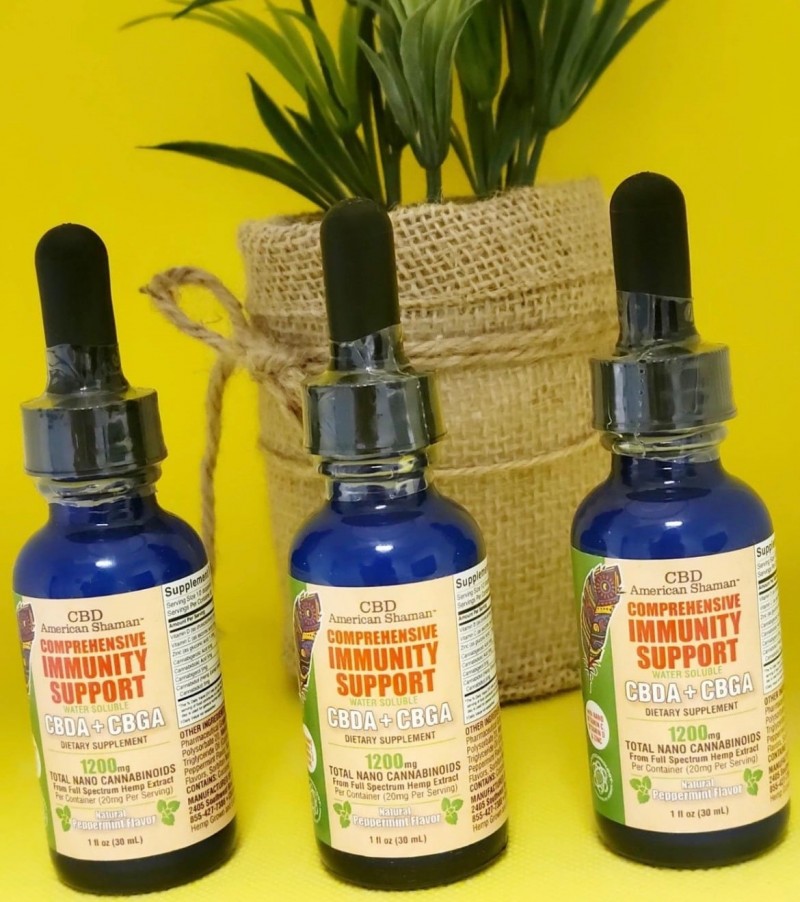 Cannabidiolic acid (CBDA), cannabigerolic acid (CBGA), and tetrahydrocannabinolic acid (THCA) are known as acidic cannabinoids because they are all precursors to the CBD, CBG, and THC cannabinoids that most current cannabis products use to deliver the medicinal properties of the plant to customers. As we’re adding more and more cannabinoids to our roster of products, we aim to provide new beneficial effects or to more effectively achieve the effects of existing products. Research indicates that these acidic cannabinoids are not psychoactive and could offer support for anti-inflammation and anxiety.

In particular, CBD American Shaman is providing CBDA and CBGA in the form of a new immunity support product that contains CBDA, CBGA, and vitamins and minerals intended to support immunity.

But with more variety comes more complexity in the decision making process. Which products are right for you? This post is intended to explain what these new acidic cannabinoids are and why we are adding them to our product list.

What are acidic cannabinoids?

As stated before, CBDA, CBGA, and THCA are all the acidic precursors to the compounds that are currently more widely known in the cannabis industry: CBD, CBG, and THC. The acidic cannabinoids exist on the cannabis plant in its raw form. Fresh cannabis actually has a very low CBD, CBG, or THC content until it is dried, and the THC will remain mostly unconverted after drying. This means that the acids are completely natural.

Why haven’t I seen the acidic cannabinoids before?

Due to heavy limitations on research in this field, only THC and CBD have been able to be studied in much depth. This does not mean that other cannabinoids do not have the same or even superior properties, only that the research to prove the effectiveness of other cannabinoids is still in its infancy. Trials indicate that the acidic varieties of these cannabinoids are more bioavailable and may provide greater effectiveness.

What are the effects of acidic cannabinoids?

It has been suggested that CBD and CBDA act differently in your body. One difference that is suspected is that CBDA is more bioavailable than CBD. Higher bioavailability allows your body to absorb a substance more quickly and with less unabsorbed waste.

CBD does not directly activate either the CB1 or CB2 receptors. Instead, it helps the endocannabinoids that your body naturally produces be absorbed by your receptors. CBDA acts in the same way.

CBDA does activate certain serotonin receptors, though. Serotonin can affect mood regulation, nausea, vomiting, and intestinal motility among other things; since CBDA has actually been found to be more effective than CBD in activating these receptors, it is expected to activate these serotonin-related benefits. This effect is still nonpsychoactive because it does not alter serotonin production or directly affect your receptors, but it could help your body absorb naturally produced serotonin.

Supporting intestinal wellness is a likely effect that CBDA is believed to have, as well.

CBDA is thought to also help maintain immune system health, discussed in more depth below. It may inhibit the ability of some bacteria or viruses to infiltrate your cells. This could lessen the impacts of illness by reducing the number of cells that become infected in your body.

CBGA is the initial cannabinoid that most others are made from during a plant’s lifecycle. Research indicates that CBG activates both the CB1 and CB2 receptors. Some of the benefits of CBGA include increased mood and energy in addition to the more general-body effects, such as regulating appetite and assisting sleep. CBGA is known to have many of the same effects as CBG in addition to some additional benefits, including it being more bioavailable.

CBG also inhibits an enzyme that breaks down anandamide. Anandamide is an endocannabinoid linked to multiple effects in the body, including motivation, pleasure, and appetite. Because CBG stops that enzyme from destroying anandamide, your body can absorb more of it, which could lead to generally improved mood and other homeostatic benefits.

Despite its effects on anandamide, CBG is considered a nonpsychoactive chemical. Even the mood enhancing effects of anandamide are simply allowing naturally occurring endocannabinoids to be fully absorbed, and CBG does not have psychoactive effects beyond that.

CBGA is also quite effective at assisting with intestinal wellness. Part of the cause is inhibition of COX1 and COX2 enzymes. This is important because COX2 enzymes are released after infection or injury, so the CBGA’s interaction with them may have beneficial properties in the body.

What effects do acidic cannabinoids have on immunity?

It is believed that CBDA and CBGA bind to a protein present in some viruses. Once the CBDA or CBGA is bound to the virus, your cells prevent that virus from entering. This doesn’t mean you can’t be infected, but with fewer cells needing to fight off viruses, you can see heightened immune support.

The product also contains vitamin D, vitamin C, and zinc. These are all known to be helpful against various infections, and they provide general immune support.

The combination of all of these with nanotechnology makes the immunity support product a good candidate for overall support of the immune system. Because nano-treated CBDA and CBGA have improved bioavailability compared to non-nanoed, it is functionally more effective.

How can you use these products?

CBD American Shaman is currently selling water soluble drops that contain CBDA, CBD, CBGA, and CBG cannabinoids with Vitamin D, Vitamin C, and Zinc to provide comprehensive immunity support. The only flavor currently offered is peppermint, but this may change in the future. These drops are available from our online store or any of our brick and mortar locations. We recommend a 0.5 ml serving size, so the full 30 mL bottle contains 60 servings.